The glittering backdrop of the lights of New York City gleamed brighter, and the full moon smiled as marvelous Marilyn Maye took the stage at Dizzy’s Coca Cola at Jazz at Lincoln Center. It was a perfect union of artistic complement.

As always, the impeccable Ms. Maye looked stunning in glittering black as she proceeded to, once again, blow away the audience opening with an apropos “Fly Me to the Moon” segueing into “Come Fly With Me” accompanied by the genius of musical director-pianist Tedd Firth with Tom Hubbard on bass, Eric Halvorson on guitar and Rod Fleeman on drums, each given their star solo turns throughout the night. 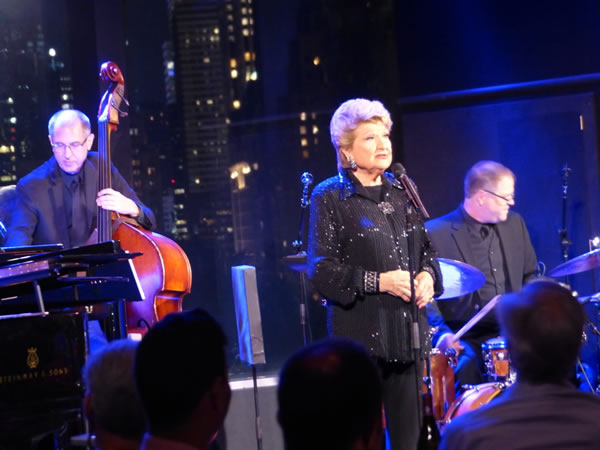 Marilyn Maye By Sandi DurellYes, Ms. Maye knew the great jazz legend Dizzy Gillespie and the evening resounded with tunes from the great American Songbook, as this 88 year young iconic jazz legend, her wry sense of humor ever present, proceeded to tell the stories in a medley of songs that included Cole Porter’s “I Get a Kick Out of You,” “I’ve Got You Under My Skin,” Gershwins’ “I’ve Got a Crush on You,” “They Can’t Take That Away From Me” . . . Harold Arlen/Johnny Mercer’s “Come Rain or Come Shine” (the latter sung in Ms. M’s favorite style, a jazz waltz).


It doesn’t get any better than this even though she admits it’s a bit harder than it used to be a few years ago . . . doing two shows a night with the energy of a 30 year old! She is the proverbial master class.


Her most requested song is the sad story of seeing your loved one with another woman in that dimly lit café – Murray Grand/Elisse Boyd’s “Guess Who I Saw Today” – a definitive story told by the best storyteller I know who has created a vignette about life as the tale progresses . . . same lady two months later at the same bar asking for “Something Cool” (Billy Barnes) and continuing with the definitive version of Billy Strayhorn’s “Lush Life.”


Duke Ellington was given a turn with “Do Nothing Till You Hear From Me” and “Satin Doll.” One of my favorites is Fats Waller’s “Honeysuckle Rose,” the mischievous Marilyn, queen of double entendres, squeezing every drop of honey that drips out of that song. Whew!


By the time the evening came to a close, and the cheering, standing ovations began to calm down, I was exhausted! But not Marilyn Maye as she came back to encore with the song that surely was written with her in mind – “Here’s To Life.”


Run, walk, take a bus, subway or taxi but GET THERE!